What's Next for dGen

dGen is now just over a year old, and while it’s been an incredible year, we have plans to expand our scope to the convergence of tech. 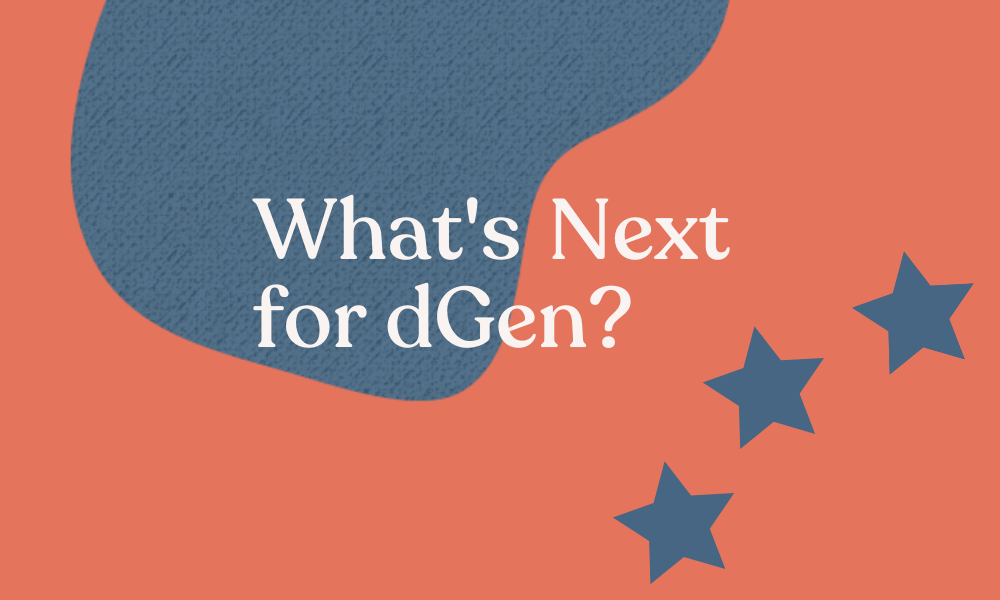 We officially started dGen a little over a year ago now. It has been an incredible year in so many ways, and I'm proud of what our team has achieved so far. Of course, there's a lot to be improved upon and many avenues yet to be explored.

And on that topic of exploration, I want to discuss what’s coming next for dGen and our direction for year two.

Thus far with dGen, we’ve had a heavy focus on the blockchain space. It’s the space I’ve been in for the past few years and I believe that in an evolving capacity — it’s one of the technologies that will shape the next generation. The blockchain space has seen billions of investor dollars pumped into it over the last few years, but in my opinion, it is only one piece of the puzzle.

Early last year I had a super interesting conversation with Max Forster (now with Cash on Ledger). He was the first person to succinctly describe the concept of ‘convergence’ in Web 3 to me. This conversation coincided with me having recently read “The Third Wave” by Steve Case.

The Third Wave was published back in 2016, just before the major blockchain bubble of 2017. It’s a fascinating oversight (if a little America focused) on what is next for the Web, as we move beyond Web 2.0 concepts of Apps and Mobile. Steve Case, if you are unaware, was the CEO of AOL in the late nineties, so he’s seen a few things.

The Third Wave highlights the internet of everything, where technology meets old industries, is at a scale that could need government involvement and impacts everyone everywhere, not just Silicon Valley! The Third Wave of the web is powered by the collection, and importantly, manipulation of vast data sources. It is applicable to practically any industry and at its heart will be enabled by Blockchain, AI and IoT.

At a similar time to the book The Third Wave, Outlier Ventures were working on their own thesis on the next wave of the internet, The Convergence Stack. Way back in 2016, in their paper “Exploring Blockchain-enabled Convergence”, the Outlier Ventures team outlined how “blockchain provides an infrastructure for other emergent trends.”

More specifically, they theorised that it would help the adoption of the following:

- The Internet of Things (IoT)

As you can see, this list of future megatrends holds up pretty well today in mid-2020 (apart from maybe 3D Printing, *sigh*).

In early 2018, Outlier decided to update this thesis into Convergence 2.0 “The Convergence Ecosystem”. It strips back what convergence means to the trinity of Blockchain, AI and IoT.

“The Ecosystem sees data captured by the Internet of Things, managed by blockchains, automated by artificial intelligence, and all incentivised using crypto-tokens. The Convergence Ecosystem is open-source, distributed, decentralised, automated and tokenised and we believe it is nothing less than an economic paradigm shift.

“We believe that future decentralised data infrastructure will come from the convergence of the Internet of Things (data production), blockchains (data distribution), and artificial intelligence (data consumption). The integration of these technologies will see markets become increasingly open-source, distributed, decentralised, automated, and tokenised.”

Our realisation is that talking about blockchain as a single disruptive technology is incoherent with the fundamental shift that will occur over the next decade. Web 3 is not about blockchain, it’s about the convergence of complementary emerging technologies. Thanks to the combined thinking of Steve Case, Outlier Ventures and a recent report by the EU Blockchain Forum for pioneering this logic.

The nascent blockchain industry of 2017 and 2018 just wasn’t ready for mass adoption. Many of those ideas have fallen by the wayside, however, they may yet have a second life, because as Bill Gross highlighted “Timing is the most important factor to startup success”.

The focus in 2017 was really on ‘blockchain everything’. How can we make something better? Let’s put it on the blockchain, let’s create a token, blockchain will save the world, I for one sampled the Kool-Aid. But blockchain isn’t all hype. We can now look beyond the 2017 era and start to see what blockchain really is, and in my opinion, it’s an enabler.

Blockchain is the enabler that helps other technologies such as AI and IoT unlock their full potential. With its ability to streamline payments, privacy-preserving features, governance potentialities and decentralised identity capabilities, blockchain is a powerful enabler when applied in convergence with other emerging technologies. The combination of blockchain, AI and IoT will form the foundations of Web 3 and the next wave of the internet. The wave experienced by the Decentralised Generation a decade from now.

As the discourse moves beyond blockchain-only use cases towards a collaborative, convergent and cognizant understanding of how Web 3 will reach the adoption of 10 billion people, we can see how all of these technologies start to combine to revolutionise every industry in our economy.

Our goal with dGen is to foster the adoption of emerging technologies in Europe. This requires us to research, matchmake, educate and promote the best that the European startup ecosystem has to offer. We believe Europe has the ability to lead the way into Web 3 and we want to play a part in bringing this potential to fruition.

Going forward we will look at all emerging technology that impacts dGen (The Decentralised Generation), and we will start doing reports and making partnerships in tangential areas, with the greater goal of bringing game-changing technology companies, investors, regulators, academia and enterprises together to germinate greater innovation on topics that impact the EU and its citizens. We want to be a pan-European voice that looks globally to make sure the most interesting ideas are heard and distributed. We have a pan-European and growing team to follow through on our mission.

Over the coming months, we will start to add new themes as we meet the right people and feel we can contribute to the conversation in that new subject area.

We will still focus heavily on blockchain, but we want to branch out and invite people in to collaborate, to open the doors of the blockchain space to other emerging technologists and create a two-way knowledge flow that benefits both sides. We will soon announce a new initiative that we believe is a key component to increasing collaboration in the European ecosystem.

“Make people work together; show them that beyond their differences and geographical boundaries, there lies a common interest” — Jean Monnet, Founding Father of Europe.