The rise of office jobs led to massive cities. With a new shift out of the office, what changes will remote work bring to our cities and our lives? 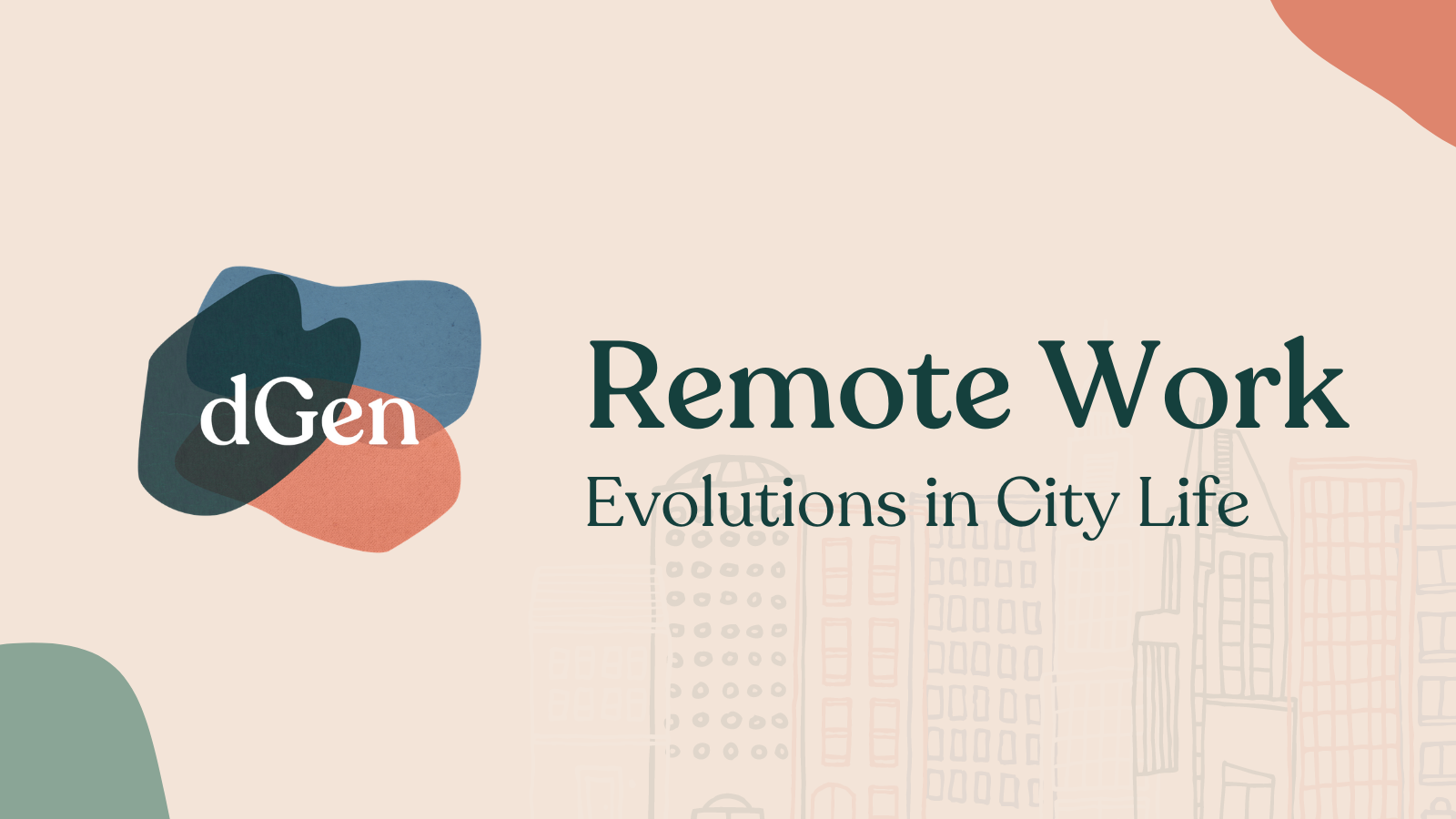 Conversations around remote work largely focus on how people carry out their work day-to-day and the tools they use. Over the first half of 2020, this revolutionised for many. However, a step back may reveal even bigger societal shifts on the horizon. Looking at how the standard office job grew to popularity, we can begin to see how another shift to remote work will once again change the environments we live in.

Industrial urbanisation led to major changes in the distribution of workforce and citizens across different sectors and areas. The amount of people working and living in cities was pushed from 16.70 to 74.05%.

In Europe, urbanisation led to major advancements in culture, science, politics and economics, setting the egalitarian principles of modern European society. However, it also incurred a host of drawbacks. Although attractive for many reasons, European cities have many disadvantages compared to rural or suburban areas. In fact, studies reveal that the attractiveness of a greater quality of life in urban areas leads to a level of crowding that, eventually, lowers the city life quality below that of suburban or rural areas.

As workers decide to either go remote or, more likely in the short term, take more home office, this will have a profound impact on two major aspects many people’s jobs:

The early signs of a wider movement away from centralised office space is already apparent. In the wake of the recent work from home mandates spurred by Covid-19, many large companies announced remote work or the ability to work from home multiple days a week will now be standard policy - at least in the short term. A recent study found that 54% of surveyed companies planned to make remote work a permanent option for applicable roles, with 35% planning to cut real-estate costs. This is a huge mentality shift over a short period of time, with enormous implications.

With the economic effects of Covid-19 already apparent, large corporations are incentivised to cut costs by downsizing office space. However, over the course of the next decade, these numbers could become the norm across all office companies. With a shift to smaller offices already taking place and a 10-15% drop expected as the direct fallout of Covid-19, over the next decade the drop in demand for commercial office space could lead to price drops as high as 30%.

The savings are in the millions of euros per year for some firms, providing plenty of incentive to keep their teams at least partially remote.

The massive savings will translate into either greater returns for shareholders or reinvested into money making, rather than money draining, costs. Even a minimal shift to part-time remote work for some employees could lead to a 36% cut to city office spaces. This will have a drastic impact on city make-up. Looking even further across the coming century, this number could be more profound as firms come to grips with hiring globally or remote-first, rendering the office even more obsolete.

After a lengthy period of industrial revolution, there was a rise of suburbia, as many families and workers wanted to escape the polluted and crowded city centres.

With fewer central offices and greater remote work opportunities, suburbia's second coming could be one of the biggest contributors to the deurbanisation of cities. However, while suburbs are popular for lower prices, quiet, and larger spaces, commutes pose problems for suburb dwellers.

However, if there was no commute, or the ability to work from anywhere, what percentage of people would still choose to live in a city centre? With the new found flexibility of remote work, we will see the second rise of suburbia and satellite towns. Cheaper housing prices, larger houses, and gardens will entice more people to move out of cities earlier in life, with no dread of that two hour commute.

There will be a number of secondary effects from this, as well as even more profound shifts that could arise.

The rise of suburbia due to home office and remote work may contribute to the de-gentrification in cities. Gentrification has been a plague on large European cities that swept from district to district, forcing long term residents out in lieu of young, well-paid professionals. This transition leads to higher prices and cultural transformations that are not always fair to the incumbent population, and forces them out.

With more work from home opportunities, office workers gentrifying neighbourhoods will have more choice on where they live. While not all city residents will decide to move out of the city given the opportunity, this could still significantly slow gentrification across major cities. In the long term, there may even be a reversal of the current trend, leading to de-gentrification - or even in extremes, an urban economic slump - if a majority, or even half, of workers become remote. While this may provide necessary relief for current cities, the exact impacts of this are unclear, as these affluent, young professionals begin to populate smaller cities, suburbs, and rural areas.

Less demand for office space in major European cities will have dramatic effects on daily commutes. The first impact is that traffic may decrease substantially. Pictures of cities across the globe while in “lockdown” points to what is possible even in some of the world’s biggest and densest metropolises.

With less daily car traffic and reduced housing demand in inner cities, walking and cycling will become far more feasible and normalised within cities. With 40% less traffic during the lockdown, bikes became one of the most popular modes of transportation. Dropping housing prices and reduced competition for prime locations will enable people to cut their commutes significantly. It may become normal to stay within a 5km radius for much of the week, with longer trips reserved for visiting friends, family, or attending events in different parts of the city or a weekly visit to the office. This concept has gained widespread interest in many major cities around the world, including Paris, when the “15-minute city” was part of Mayor Anne Hidalgo’s re-election campaign earlier this year. The “15-minute city” pushes the idea that residents should be able to reach all essential services with a 15 minute walking or cycling commute.

Work commutes remain one of the most pressing issues to the “15-minute city” campaign, as better city planning cannot account for this. However, more remote work opportunities solves this problem. Further, if shorter and more infrequent commutes become normalised, pedestrian-only streets and larger bike lanes, such as the pop-up bike lanes, could become normalised in these communities, fostering greener and less crowded micro-communities.

However, micromobility providers and other first- and last-mile solutions could see a major increase, as connecting suburbs, especially for younger generations, becomes a pressure point.

The Rise of Lifestyle Cities

While suburbia has been plagued with less-than-trendy associations, the next few decades may see the rise of lifestyle cities. A lifestyle city is either a current city that people admire for its quality of life, or a new city with potential for a high quality of life, but that until now has lacked a real economy, and therefore has not blossomed.

With all of the possibilities that the internet, remote work tools, and now, the wider acceptance of working from home bring, people can start thinking more creatively about what “Quality of Life” means to them. Is it living by the beach? Is it living somewhere with more sunshine? Is it having a bigger garden? Is it a place with much better food?

Generally speaking, until now, the first question most people asked was, is there a good job or prospects for me and/or my family? If this final question is taken out of the frame because location is no longer a factor, then people can choose where to focus on instead.

Over the next decade, we might also see a rebirth of village life. Young professionals with greater freedom given by remote working, may look away from urban areas when seeking for a place to live.

A few villages without essential services might see a new life throughout the initiatives of some families or groups of friends who want to modernise the town. Further, governments have also begun to support remote workers with new infrastructure investments. The Grow Remote movement, started in Ireland, also points to grassroots initiatives across Europe.

A new economy will be born consisting of remote workers, employed by companies based in the city or internationally, but with the desire for a rural lifestyle. As these options develop, services catering to transient workers will also likely arise, where residents can stay for months at a time before moving to another community somewhere else.

With remote work already becoming a norm, the time to begin planning for the changes it will bring in the long term is now. While this year’s experience with remote work may have been less than ideal for many, given it’s rushed nature, going forward, remote work could deliver on the promise of higher quality or living, more flexibility, and even address many large-scale issues facing society today.