How Your Career Will Change by 2030

Remote work is paving the way to multi-job careers and global hiring. How will this change over the next decade? 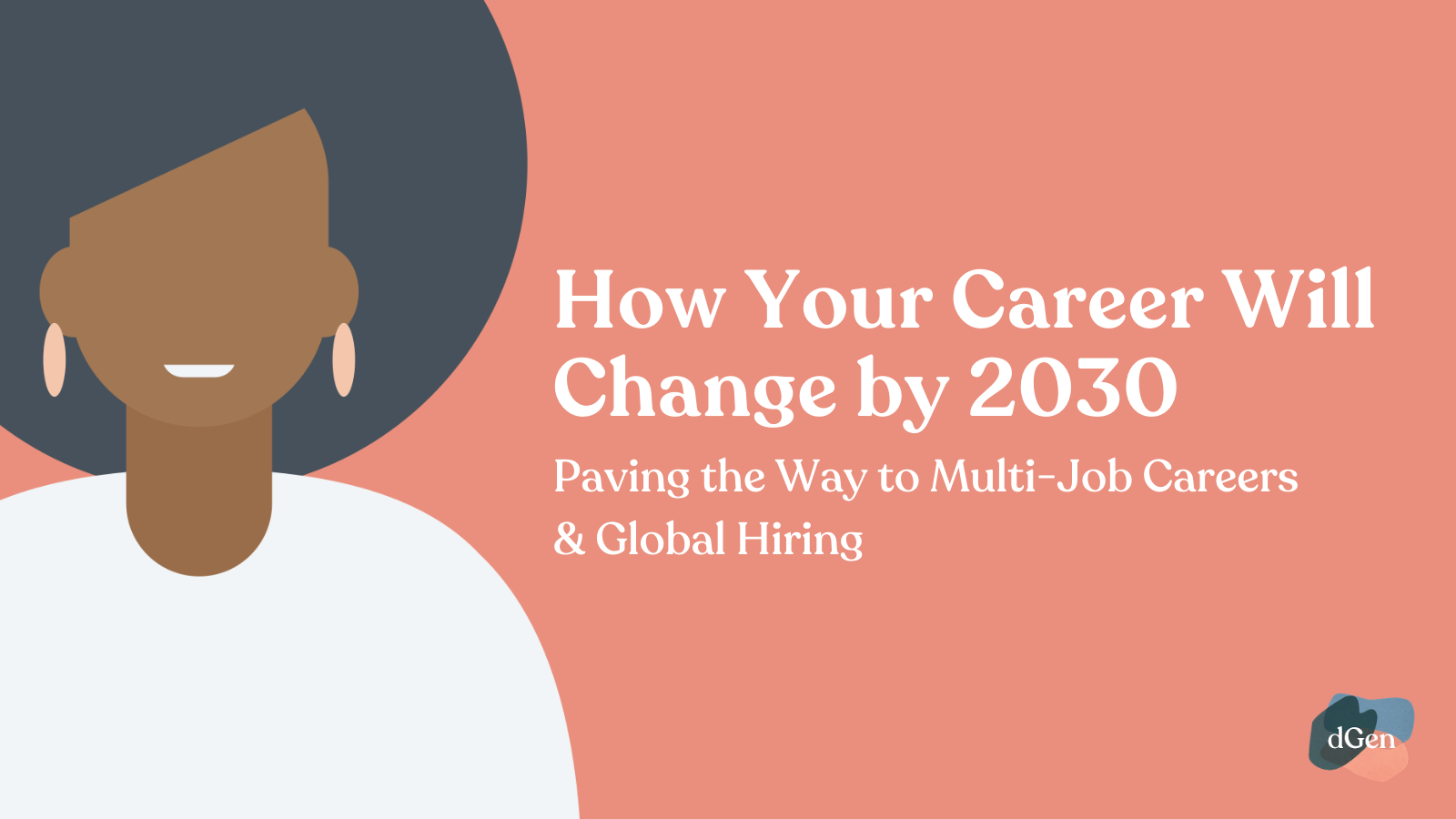 Co-working hubs have cropped up around cities, often accompanied by digital nomad reviews and recommendations. And while corona may have paused many perks of the life of the digital nomad for a year or two, these changes can largely be accredited to a major shift in the job market over the last 100 years. As the economy of the 18th and 19th centuries evolved away from primarily agricultural work towards the second - manufacturing work - through the 20th century - with a much heavier reliance on tertiary jobs.

Today, 71% of jobs in the EU are tertiary. While primary and secondary jobs both provide a physical product, tertiary jobs provide services. Tertiary jobs also make up the bulk of the employment that can fairly easily go remote, although it should be noted that some jobs, such as the hospitality sector, cannot be made remote. Even so, this leaves a huge potential for the rise of remote work.

With the need to physically work on a product removed for most workers, the last remaining barrier was communication. And, while even the telephone was not able to overcome this barrier for many, the growth of the internet and an almost infinite amount of affordable software tools now available have solved this. The realisation that office workers are no longer bound by place was cemented through the Covid-19 pandemic, even by some of the most reluctant.

But, with an unprecedented number of workers experimenting with work from home, how will this change our lives and the careers over the next 10 years?

Hiring has generally been place-based, with millions of people moving every year for the job market. Pulling from a global job market was primarily isolated to executive roles. Remote work offers the chance to expand that privilege, as not only workers the opportunity to work from anywhere, but companies can hire from anywhere. ‘Remote companies have a worldwide talent pool to choose from’, as Jitesh Patil, SEO & Content Specialist at Toggl Plan, put it. The global job market is already available for a whole host of industries and roles, and will only continue to grow.

Putting Out the Call

However, it’s still not easy to create a global job advertisement. Patil noted that ‘recruitment costs go up’ for remote companies, because they ‘need to invest in building their online reputation and brand’ to recruit. While a number of the largest job platforms have added “remote” location options, these are often still governed by country, leaving a huge gap in the market as companies begin to explore the possibility of global hires. Carlos Gómez, Talent Manager at CryptoRecruit, summed this up with:

‘Founders and CEOs are getting more and more frustrated with recruiters from traditional industries[...], because even after decades of experience, most of them are still struggling to find talent within the new [remote] job market dynamics’.

There are already some industry specific platforms for this. For example, developers or designers have been linked to remote work and global platforms for much longer, reporting the highest proportion of remote work in 2018. And freelancers, another leader in remote work, have been fast adding to this global workforce. But, this is only the beginning of much wider platforms aimed at many industries and roles that will allow hiring managers to find candidates from anywhere in the world.

The global job market will turn both the employment and hiring opportunities on their head. Companies will be able to set up headquarters in a small village without disrupting the town with a workforce of a thousand people. An internet connection will be the primary prerequisite to be able to work for companies based around the world. As competition for jobs and talent increases, this may also affect corporate hierarchies and geographic distribution of managing and executive teams.
With access to a much larger pool of remote jobs across Europe, clear socioeconomic impacts for both cities and rural areas will arise. While it is unclear the exact impact of a large-scale digital workforce, one could be that less young people migrate across Europe looking for work - finally offering a solution to “brain-drain” plaguing rural areas and Southern and Eastern Europe. Recent graduates may simply choose to stay in the areas around their homes and universities.

This is a necessary change, and one the EU should focus on facilitating, as a recent McKinsey report found ‘many places in Eastern Europe are facing the double effects of aging and emigration, creating a vicious cycle of shrinking labour supply and declining demand’. It was noted that ‘[o]ne wild card in these estimates is the sudden shift to remote work’. Remote work offers the correction to declining employment opportunities in all but the largest cities. To benefit from this, we need a pan-European, or at least EU-wide, job market and the proper infrastructure, both in the form of internet and regulation.

With workers able to live and work from anywhere, the exodus from many European countries, particularly from Eastern to Western and Southern to Northern Europe, could now start to reverse over the next decade and we may actually see a “brain gain” - the opposite of a brain drain, back towards certain countries as skilled tertiary-sector workers operate remotely. This could be a huge boost to local economies. It might even slowly contribute to more social equality across Europe over the rest of the century, with location no longer acting as an inhibitor to high earnings.

The amount of freelance workers globally is rising, with the number of freelancers in the EU doubling between 2000 and 2014. Freelancers have some of the highest rates of remote work. However, freelancing often means short-term contracts, multiple clients, and a lack of security. Simultaneously, this can also translate to higher earnings, and is most often undertaken by people with enough experience to obtain regular work and these higher rates.

To provide workers with multiple jobs more security, improved harmonisation is the minimum requirement, although a complete overhaul of job classification could occur.

At the moment, freelance status locks employees out of many social and legal benefits. Tax systems in many countries will have to adjust to encompass workers with a second, third, or even fourth job. This is further complicated by taking a single location out of the mix. The EU is well situated to harmonise taxation for employees of companies located in different countries.

With more multi-job careers, remote freelance contracts could become less common, shifting to remote employees with contracts at multiple companies at the same time. Sahin Boydas, Founder and CEO of Remoteteam.com, pushes this even farther. Boydas expects a move ‘towards having micro companies - where each individual could be their own company, working for multiple firms around the world’. Regardless, we will likely see a change in the classification and contracts of these types of workers, as both companies and individuals seek to streamline tax payments.

Debates are currently being carried out around how to determine salaries for remote workers. If remote hiring takes hold, though, these issues will become even more apparent. To address the variation in cost of living across Europe, some firms will likely opt to implement location-based salaries - tailored to employee location. This is currently the case in some of the largest remote organisations in the world, like Gitlab. They pay their employees on a system based on local living costs and can therefore make sure everyone in the same role has a similar standard of living.

While this ensures that companies benefit from remote work, as it removes the need to pay high salaries in top locations. For example, some of the largest tech companies based in Silicon Valley, like Facebook, are exploring this. Living costs there are some of the highest in the world, and as some tech giants, so as they extend remote work options, some employees are looking to leave the area.

However, there are arguments both for and against this model. The obvious argument against is that two employees providing the same service will not earn the same amount. But, on the flip-side, employees in expensive locations often feel shorted if they have to get by on the same salary as colleagues who reside in cheaper areas. Place-based salaries are also less disruptive to the employees home-location and can help ensure that employees don’t stay with a company solely because other salaries open to them in their area would be much lower.

While common salary practices are established, the issue of other tech companies out-pricing place-based salaries for highly sought after employees who live in relative low-cost areas could arise. As Carlos Gómez, a Talent Manager at CryptoRecruit, told us, ‘skillful professionals are able to look online for more employment alternatives’. Ideally this will drive ‘[b]isness common sense in the form of smart companies taking care of their good employees and good employees negotiating better conditions’. There may be a learning curve, though. Meanwhile, whether or not place-based salaries present the best solution remains to be seen, even with the complications of determining salaries for different locations, it will still likely increase as a practice.

Hiring practices and how our careers are structured will undoubtedly change for both employers and employees, as jobs that are remote from the start become more common. Some changes will be simpler than others to implement, such as developing global job boards, others, like expanding job contracts and rights for multi-career workers or figuring out best practices for salaries, will be harder. However, with the benefits of flexible and remote work becoming more apparent, these changes are inevitable, and planning for them necessary.

For more analysis about how a shift to remote work might change our cities, rights, careers, and home life, download the full “Remote Work in Europe, 2030” report.